Halloween is lurking just around the corner, which means the debate begins again—should I allow employees to come to work in fancy dress?

Most employees are spooked by the idea, conjuring up images of staff dressed up as their favourite Avenger, giant hotdogs, or plastered in fake blood.

Others think of the occasion as a way to thank your employees for their hard work and encourage workplace inclusivity.

Whatever your perspective, it’s important to be aware of, and plan for, potential issues that may arise.

Fancy dress in the workplace

Frightened by the legal implications?

Don’t be scared, be savvy.

Legally, you don’t have to let your employees come to work dressed as a scantily-clad cat, or Dracula, just because it’s Halloween.

Most companies will maintain a clear dress code policy that outlines what is, and is not, acceptable workplace attire—there’s no obligation on you to relax this.

For example, if your company is primarily customer facing, you’ll likely want your staff to maintain a professional look or even wear a uniform.

However, letting employees dress up to mark Halloween can be well received by a workforce. Fancy dress may not be possible in all companies, but the occasion can help to improve employee morale, maintain a positive relationship between management and staff, and encourage higher levels of productivity. 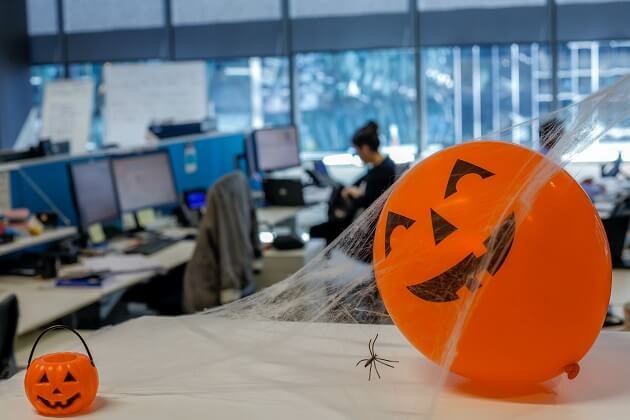 There’s some truth to it—workplaces generally become more relaxed when in casual clothes, let alone silly outfits. And, some employees may try to take advantage of the relaxed atmosphere.

To combat this, implement a policy which addresses office parties or work-related social events. The policy should outline that staff have a duty to behave responsibly at all times.

Ahead of the day, it would also be a good idea to issue a reminder to your employees.

You can do this via letter, email, text, or via the company intranet. The reminder should restate the company’s rules on acceptable dress and, particularly, what form of outfit should be avoided. (More on that later)

If any individual breaches this expectation, begin a full investigation into their conduct and discipline them appropriately.

Tact can be in short supply when rules are relaxed. Particularly so on Halloween.

You should also consider that some members of staff may be offended by the outfits that their colleagues wear, something that could easily lead to grievances being raised and/or claims of harassment.

You can tackle this issue with the previously mentioned policy and reminder. Also, remember to reiterate any safety rules that apply in your workplace. For example, if open-toed shoes aren’t usually permitted, ensure employees don’t wear sandals or flip flops.

As a general rule, it’s a good idea to avoid excessive gore, so no fake blood, boils, blisters, scars or contusions.

Also avoid clowns. (Apologies to anyone half-way through creating their Pennywise costume).

Finally, reiterate that employees need to be able to perform their roles—as usual. So, any costumes that restrict movement are also a no-go.

That means no giant hotdogs, Lego bricks, and no giant inflatable T-Rex. 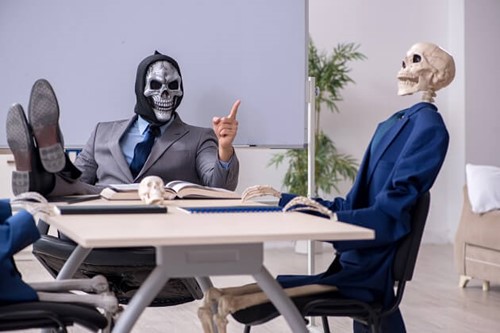 If your business rewards employees based on performance, you might be missing a trick.

Halloween should be inclusive, and shouldn’t be a treat for good performance.

Take steps to invite all members of staff to company events and don’t single out employees who may not be performing as strongly as their colleagues.

This could easily make individuals feel excluded and potentially have a negative impact on your ongoing employment relationship with them.

Likewise, you should always be mindful of members of staff who may not want to take part. At the end of the day, this is meant to be a voluntary activity and at no point should anyone be forced to dress up if they don’t want to.

Keep an eye out for any bullying behaviour that may arise as a result of this.

Provided they are carefully planned, fancy dress days can be a fun activity for all who take part, and not the horror-show you might expect.

That said, be wary that they’re not used as an excuse for poor behaviour. It’s essential that your workforce is aware of the rules surrounding dress-code and behaviour. Communication is key to this.

After all, the last thing you want is a discrimination claim.