With the Ministry of Justice releasing the statistics for April-June 2020, we can take a look at employment tribunal numbers for this quarter alongside the largest amounts awarded from successful claims within financial year 2019/20.

These statistics are useful indicators of the most prevalent claims being made against employers alongside how many cases are being put before employment tribunals in total. The most recent figures compare quarterly claims in comparison to the same period of time in the previous year and list the amount of overall claims between April and June 2020.

The latest Employment Tribunal statistics have been related. Here are the headline figures: 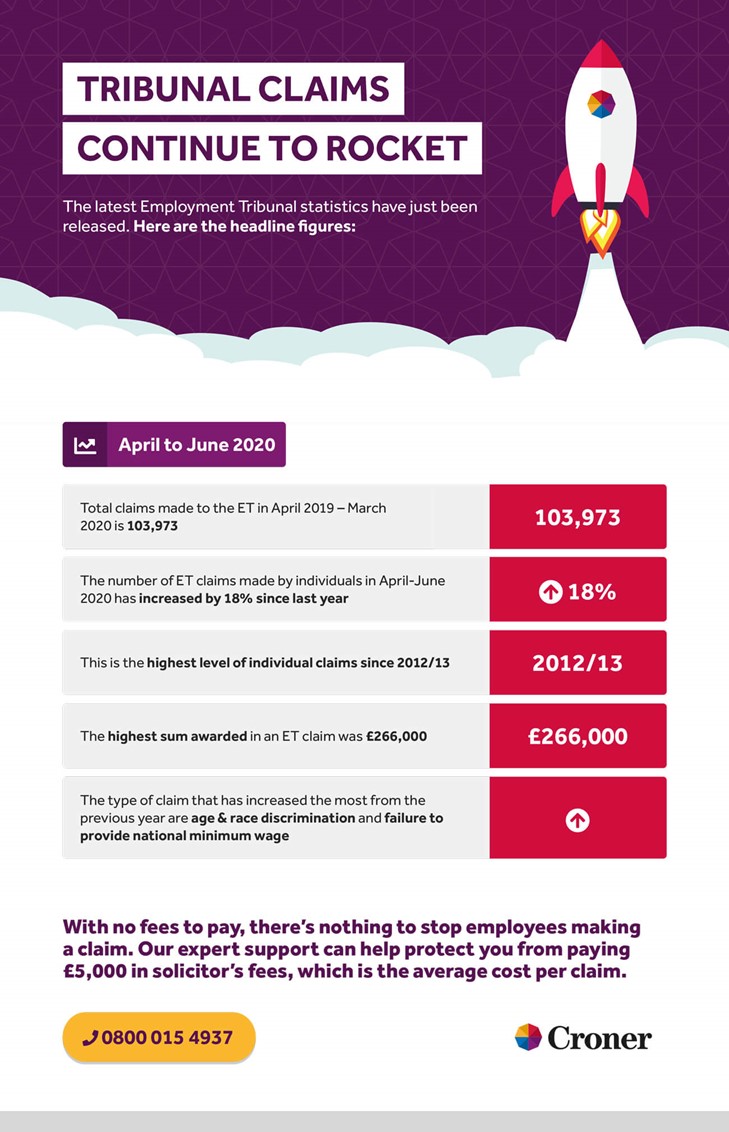 Add this infographic to your website by copying and pasting the following embed code:

What do the statistics say?

Of the claims dealt with in this quarter (April to June):

What this means for employers

These latest set of statistics are a helpful look at claims in the 12-month period leading up to the COVID-19 pandemic, alongside trends that we are starting to see as businesses started to respond to lockdown restrictions in April onwards.

As usual, 2019/20 saw a large number of claims submitted to the employment tribunal, which while down on last year is still a reflection on the removal of tribunal fees, repayment of which continuing to slow as of June 2020. Crucially, these figures once again show the dangers of successful unfair dismissal claims. Whilst the maximum award for 2019/20 was considerably less than what we saw in the previous year, £900,000, it again sends a clear message that the statutory cap for unfair dismissal does not count in certain circumstances.

Head into the first quarter of the 2020/21 year and already the impact of the COVID-19 pandemic begins to show itself in tribunal statistics. It is not surprising that unfair dismissal claims are now the most common claim disposed of, something likely attributed to companies acting in ways they would not usually do as they struggled to respond to the pandemic. With the tribunal service already under significant strain before the pandemic, we are now seeing a significant amount of outstanding caseloads, something that is likely only to continue to grow as we head into the second and third quarters.

It is also interesting to see such an increase in the failure to consult during a TUPE transfer. Employers need to be aware of their legal obligation to do this, and the potential consequences for not doing so.

What can employers do?

As said above, the coronavirus pandemic continues to be a present concern for employers and they must make sure they are legally compliant in their response to it. It is important to remember that employment law is not suspended due to the pandemic; now more than ever, they need to get these key procedures right and avoid the risk of being taken to a tribunal. Crucially, all decisions to dismiss an employee must follow a fair process and are reasonable.

Taking advice to settle a claim, whether through a settlement agreement or at the Early Conciliation stage, can reduce the financial risk of facing a tribunal and prevents the reputational risk of a tribunal judgment being published online.

As stated before, companies should also maintain an equality and diversity policy that outlines the steps the company will take to combat discrimination arising in the workplace. Specifically, employers need to be aware of the legal obligation placed upon them to make reasonable adjustments to assist disabled employees.

Despite recent rumours, there is still no confirmation from the government that tribunal fees will return. If and how this would work does remain to be seen; due to the nature of their abolition, a new procedure for submitting fees is extremely unlikely to follow the same processes as before.

Protect yourself with Croner

Facing an employment tribunal and not sure where to turn? Speak to a Croner expert today for advice, support, and even  tribunal representation. Also, with our legal expenses insurance, if the worst happens and you do lose a legal case, you won’t have to pay a penny.

With no fees to pay, there's nothing to stop employees making a claim. Our expert support can help protect you from paying £5,000 in solicitor's fees, which is the average cost per claim. So, call a Croner expert today on 01455 858 132.